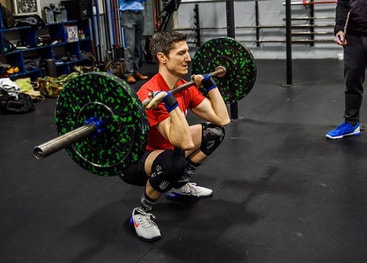 Congratulations to Adam Brown for being the Athlete of the Month for July 2019!!!  Adam has been a member for Upper Cape CrossFit  since we first opened in March 2013, coming here from another box.  There aren't enough kind words for this guy.  He has been a big part of the UCCF community from day one.  Adam is always the first to introduce himself to an unfamiliar member, and make them feel welcome. As one of our longest members (if not THE longest member?!), I really feel UCCF would not be the same without him. He still continues to push himself day after day, and encourages everyone around him as well. (#rolemodel)

For those of you that are not aware, Adam "Doc" Brown is a doctor.  He has provided helpful guidance and advice to many of our members.  Last year he attended  a CrossFit MDL1 that was hosted at the Ranch in Aromas, California. Basically, it’s the L1 geared toward doctors with the goal being to reach into the medical community and give them the tools of functional fitness/medicine.  Adam recently stopped mid-workout (during a Hero WOD, no less) to help a fellow CrossFitter who needed medical attention.  He did not hesitate to go to their aid and make sure he was okay.  We have no doubt he would do that for anyone here.  We are lucky to have people like Adam as a part of the UCCF community.

Lastly, Adam just did something many of us would like to do.....he went to Madison, WI to watch the 2019 CrossFit Games!!!!  He got to see all those elite athlete's in action, coming back and sharing his experience with us.  Adam is one dedicated CrossFitter.

Thanks for everything you do here, Adam!

A little more about Adam...

How was I introduced to CrossFit?
My first CrossFit workout was Murph.  LT Murphy was killed while I was a medical officer for Naval Special Warfare and we decided to tackle the workout as a way to honor and remember LT Murphy (who was killed in action in 2005).  First time was in body armor, which weighs more than 20 pounds.  I remember thinking that it didn't look all that bad, since I had run in body armor before.  I was completely wrong.  Took me well over an hour, and I was flat out destroyed afterward.  After that we started (trying) to get after WODs that we would see on CrossFit.com -- Nasty Girls, Linda, Annie, Filthy Fifty, etc.  Downloaded the official CF PowerPoints to try and learn movements like overhead squat and snatch (which probably explains my struggle with improving form...).  Loved the workouts and the community aspect so as soon as I could find (and afford...) a CF gym in Michigan I started attending classes during my anesthesiology residency and haven't looked back since.  The people and community of CrossFit in general, and especially Upper Cape CrossFit, are incredible.  Being at UCCF is one of the best parts of my day.

My favorite WOD/exercise is?
Murph

My 3 favorite movements are?
Ring muscle-ups, Pull-ups and Squat cleans

If I never had to do this exercise again i would be psyched:
Assault bike - I am terrible at the bike.  I try never to avoid workouts that involve bike work, but I can't say I enjoy being on the bike - more like get through it and on to the next movement after much cursing.

My proudest CrossFit accomplishment is?
Hitting a 160 pound Snatch, with Coach Tony watching.  It was definitely far from anything even remotely resembling "perfect" but Tony said it was acceptable and it felt good to increase my ability in an extremely difficult (at least for me) lift.

A fairly distant second was meeting Coach Glassman during my Level 1 course last year at The Ranch - Coach G is a very dynamic individual with a truly different world view, which makes for an interesting conversation.

My six month goal is?
Use Sunday open gym to work on Olympic lifting movements.

If i created a WOD and named it after myself it would be:
There already is a WOD named "Adam Brown" - named after a SEAL, Chief Special Warfare Operator Adam Brown, killed in action in 2010.  That particular hero WOD is brutal, and well outside my ability to complete RX (I have to scale multiple movements in that workout).  I wouldn't want to dishonor Chief Brown's memory with another same-name WOD, but a workout I've done multiple times during open gym is (goal was to hit a bunch of movements, and also run a mile total):

Previous Athletes of the Month: