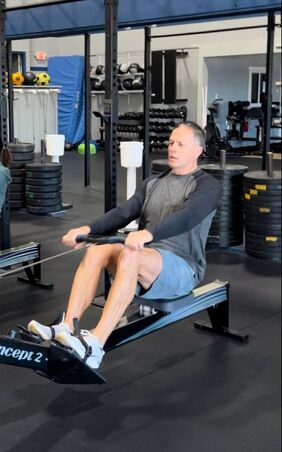 Congratulations to James "Spike" Burgess for being our Athlete of the Month for December 2022!  Spike has put in a lot of time and effort for this long overdue recognition considering he started CrossFit at UCCF in 2013, making him a UCCF OG!  He could easily be described as an unassuming badass and is the personification of “show don’t tell”, to the point that you might not know he is there until he laps you on a metcon.  He often picks a back corner as his spot to work and you will see him sitting, done before most, watching the rest of the class finish up.  His approach to working out reflects that he makes really good choices regarding weight and movements that are based on his capabilities, as well as how he might be feeling any giving day.  He also knows when to take a rest day or two.  He is a great role model for how to do things right.  Not to mention he is also an incredibly nice guy.  When Spike is not at UCCF, he is busy being a husband to Kristin and dad to son's Ryan and Reece, while also working in the wireless industry (we are sure he could explain that better).  We are extremely lucky and thankful that Spike has been with us for all these years.  Here's to celebrating 10 years together!

A little more about Spike...

My favorite WOD/exercise is? I like doing the monkey bars across the rig that's between the rooms, but I've only done it once. My three favorite movements are Rope Climbs, Overhead Squats and Power Cleans.

If I never had to do this exercise again I would be psyched: I hate Thrusters.  I'd like to punch them.

My favorite cheat meal is....By saying I have a cheat meal would suggest I'm on some kind of a diet.  I eat a bowl of ice cream most nights.

My proudest CrossFit accomplishment is:  That one time I finished a workout ahead of Kristin.

If I created a WOD and named it after myself it would be:
20 Minute AMRAP:
9 Deadlifts
1 Bar Muscle-Up
1 Rope Climb
400 m Run

Anything else you want to add? I am really thankful for all the people I have met over the years through UCCF.  Friends I'll have forever.  I've seen babies born and watched kids grow up; been to weddings and funerals.  UCCF has been a big part of my life and I'd like to thank everyone who has been a part of it.